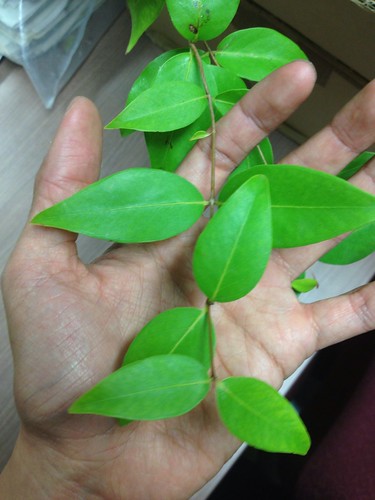 By world standards the rainforest flora of Australia is rather well described, but there are still species out there to name and discover. Such was the case with a mystery tree found at Mt Stuart near Townsville. Thus far the population at Mt Stuart is the only one known.

The species is a tree between 5 and 12 metres tall, with multiple trunks with a mottled flaking bark. The bark has a range of colors including grey, grey-brown and/or pink colouration, which gives the plant an appearance of a large Gossia sp.

Finally in 2012 the species of myrtle was formally described by Prof. Betsy Jackes and colleges. The species is so named because of the clustered and distinctive pink-white capsular fruits with four wings (hence “tetraptera”).

I’ve only had the pleasure of seeing the species as a cultivated specimen but I hope to one day see it in the wild.

I am David Tng, a hedonistic botanizer who pursues plants with a fervour. I chase the opportunity to delve into various aspects of the study of plants. I have spent untold hours staring at mosses and allied plants, taking picture of pollen, culturing orchids in clean cabinets, counting tree rings, monitoring plant flowering times, etc. I am currently engrossed in the study of plant ecology (a grand excuse to see 'anything I can). Sometimes I think of myself as a shadow taxonomist, a sentimental ecologist, and a spiritual environmentalist - but at the very root of it all, a "plant whisperer"!
View all posts by David Tng →
This entry was posted in Endemics, Habitat - Rain forest, Lifeform - Trees & Shrubs, Myrtaceae (Myrtle family) and tagged Backhousia tetraptera, Mt Stuart, Myrtaceae, Mystery Tree. Bookmark the permalink.