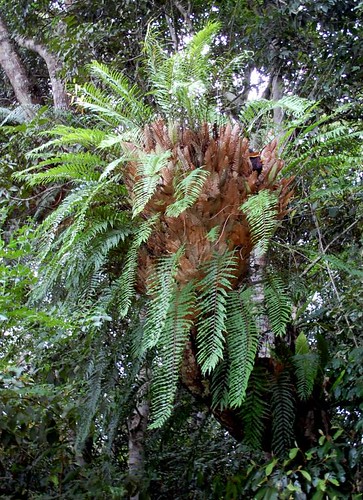 This epiphytic fern is commonly known as the basket fern and is found widely in the Wet Tropics of Australia. It is also native to the Southeast Asian region. The basket fern is probably the easist member of the genus Drynaria to recognize, as it has pinnate foliage fronds. In the other two Drynaria species (D. sparsissora and D. quercifolia, the lamina is much more clearly lobed). The round sori (spore-bearing structures) are arranged in two rows along the primary vein of each lobe.

The basket fern has an interesting natural history, as it collects humus that contributes to it’s own nutrition. It does this by modified “basket” leaves, which are often brown and dry and brown and of a different appearance to the normal fronds. Individuals can become very large and must weight a lot. In the Mabi forests up on the Atherton Tablelands, a study found that the ratio of basket fern and few other large fern species collectively is almost two to one. The basket fern is also frequently used as an abode by the Large Rainforest Python (Morelia kinghorni).

Freeman A, Freeman A. 2009. Habitat Use in a Large Rainforest Python (Morelia kinghorni) in the Wet Tropics of North Queensland, Australia. Herpetological Conservation and Biology 4 : 252–260.

I am David Tng, a hedonistic botanizer who pursues plants with a fervour. I chase the opportunity to delve into various aspects of the study of plants. I have spent untold hours staring at mosses and allied plants, taking picture of pollen, culturing orchids in clean cabinets, counting tree rings, monitoring plant flowering times, etc. I am currently engrossed in the study of plant ecology (a grand excuse to see 'anything I can). Sometimes I think of myself as a shadow taxonomist, a sentimental ecologist, and a spiritual environmentalist - but at the very root of it all, a "plant whisperer"!
View all posts by David Tng →
This entry was posted in Habitat - Rain forest, Lifeform - Epiphytes, Lifeform - Ferns, Polypodiaceae (Polypody Fern family) and tagged basket fern, Drynaria, Drynaria rigidula, Mabi forest, Polypodiaceae. Bookmark the permalink.