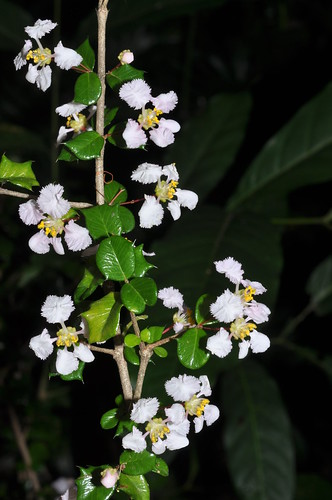 Is it nice to have an example of a type genus for a plant family to grace the gardens and waysides of Queensland.

The genus Malpighia is named in to honor Marcello Malpighia (1628-1693), a distinguished naturalist at Bologna, Italy.

The white-pink showy blossoms of Malpighia coccigera and their frilled petals are a great introduction to this largely New World Tropics family. The fruits are also supposedly edible.

Having now lived and botanized in the South America tropics of Brazil, it is interesting thinking how few members of the family there are in the Asian and Australian tropics. In contrast, the forests and savannas of Brazil are crawling with Malpighiaceaes. 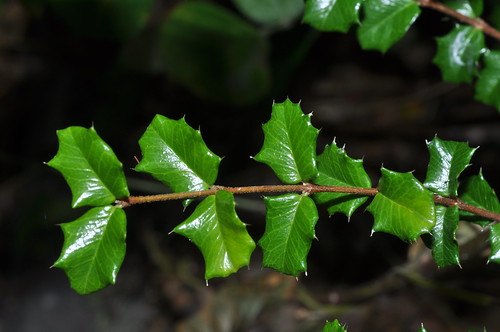 The glossy green leaves resembles that a small holly leaves, although the plant is in no way related to true hollies (Ilex spp.). Nevertheless, this has earned this shrub the common name of Miniature Holly or Dwarf Holly.

I am David Tng, a hedonistic botanizer who pursues plants with a fervour. I chase the opportunity to delve into various aspects of the study of plants. I have spent untold hours staring at mosses and allied plants, taking picture of pollen, culturing orchids in clean cabinets, counting tree rings, monitoring plant flowering times, etc. I am currently engrossed in the study of plant ecology (a grand excuse to see 'anything I can). Sometimes I think of myself as a shadow taxonomist, a sentimental ecologist, and a spiritual environmentalist - but at the very root of it all, a "plant whisperer"!
View all posts by David Tng →
This entry was posted in Habitat - Urban Areas, Lifeform - Trees & Shrubs, Malphihiaceae (Malpighia family), Non-Natives, Ornamental Plants, Tropical Fruit Trees and tagged Dwarf Holly, Malpighia coccigera, Malpighiaceae. Bookmark the permalink.